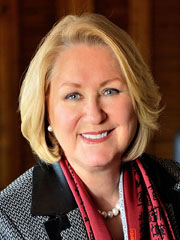 Ann Weaver Hart is the 21st President of the University of Arizona, a role she assumed in July 2012.

Since coming to the UA, President Hart has successfully led a process to create and implement an integrated strategic academic and business plan that will guide the UA’s future. With the new plan, Never Settle, the UA proclaims its intention to be a super land-grant university that advances the local and global impacts of knowledge creation through partner relationships with communities and industry and via innovative programs. In pursuit of these strategic goals, Dr. Hart recently led the University to a historic agreement with Banner Health that will support the UA’s biosciences research initiatives while creating a foundation for statewide excellence in clinical healthcare. With this model of partnership, the University will enhance the quality of life for the people of Arizona and the world by addressing real-world problems and opportunities as they arise in real time.

In addition to her role at the UA, President Hart is a member of the Association of American Universities, the Association of Public and Land-Grant Universities, and she has recently been appointed as an advisor for the Lincoln Project: Excellence and Access in Public Higher Education at the American Academy of Arts and Sciences. She also serves with a number of organizations in and around Arizona, including the Greater Phoenix Economic Council’s Executive Committee, and Greater Phoenix Leadership. She is also a member of the Executive Committee of the Southern Arizona Leadership Council, the Tucson Regional Economic Opportunities Chairman’s Circle, the Arizona State Board of Education and the Udall Foundation.

Dr. Hart has received various professional and community service awards for her work, including the Michael P. Malone International Leadership Award from the Association of Public and Land-Grant Universities; the Girl Scouts of America Take the Lead Award; the Jack Culbertson Award in Educational Administration from the University Council for Educational Administration; and the PoWer Award from the Professional Women’s Roundtable. She was named one of Arizona’s fifty most influential women by Arizona Business Magazine in 2013, continuing a record of community recognition that includes being named one of the “Ten to Watch in 2010” as the “Transformer” and as one of the “People to Watch 2007” by the Philadelphia Business Journal, one of the “50 most powerful people in Philadelphia” in 2009 by the Philadelphia Magazine, and one of the ten most powerful people in New Hampshire by Business New Hampshire Magazine.

President Hart received three degrees from the University of Utah: a bachelor of science and master of arts in history, and a doctorate in educational administration. In addition to serving as the President of the University of Arizona, Dr. Hart holds an appointment as Professor of Educational Policy Studies & Practice in the College of Education. .