Friend of the College 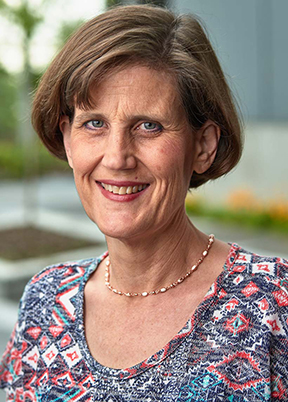 Betsy VanDenBerghe served as a member of the College of Education’s Advancement Board from 2012 to 2017. Her interest in education began of necessity when her Master’s degree scholarship entailed an English composition teaching position with little pedagogical training and two years of autodidactic attempts to help flailing student writers improve. She went on to attend the Radcliffe Publishing Course--then based at Harvard, now based at Columbia School of Journalism--and worked in college textbook development at Addison-Wesley Publishing before taking an editorial position with the Ensign magazine and starting a freelance career writing for social science textbooks, LDS Church magazines, First Things, and Real Clear Religion.

Betsy’s real interest in education emerged, however, when the first of her eight children started public school and she became heavily involved in advocating for better parent representation in Granite School District. Her work alongside literacy-minded parents motivated the district to commission a task force, on which Betsy served with Dr. Kathleen Brown of the University of Utah School of Education, and which went on to implement research-based methods that greatly improved reading scores district-wide and resulted in the formation of the University of Utah Reading Clinic. Alongside other parent advocates, Betsy became a founding member of parent groups such as Friends for Education and the Small Districts Coalition, both of which have significantly improved the responsiveness of school districts to their patrons and have resulted in significant bills passed at the Utah State Legislature.

When the younger half of the VanDenBerghe children began attending a newly founded charter school, Betsy worked with the board of Canyon Rim Academy to implement Core Knowledge education and to research effective math programs. She has learned a great deal from the charter school experience about the success that results from having all parties involved--teachers, parents, students, and administration--committed to finding the best methods and creating a shared vision.