Chris Hill retired as Athletics Director in the Spring of 2018, closing the book on a remarkable 31-year run at the University of Utah. Hill was the longest actively tenured athletics director at the same school in the NCAA FBS. 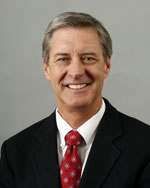 "Chris Hill leaves a tremendous legacy at the University of Utah," said incoming University of Utah president Ruth V. Watkins. "Chris has embodied all the traits needed to build a successful program: a student advocate, a skilled negotiator, a solid administrator with a keen eye for talent, an excellent fundraiser and a passionate sports fan. His leadership and relentless drive to raise the caliber and quality of our athletic programs over his 31-year career helped earn the university an invitation to join the Pac-12 Conference — a milestone that has proven to be transformational for our entire campus."

"Chris leaves us a vibrant, thriving athletics department that benefits student-athletes and our community. He has set the foundation for our continued success. On behalf of the entire university community, I thank him for his service and dedication to this institution and its students. I wish Chris the very best in retirement and look forward to seeing him in the stands rooting for his beloved teams."

Just 37 years old when he stepped into the job in 1987, Hill leaves an impressive legacy of accomplishments, perhaps chief among them Utah's move into the power five in 2011 as a member of the Pac-12 Conference.

In the years leading up to it, Hill turned down several director offers from power five schools in the belief that one day Utah would count itself among them.

"Happiness isn't all about money and prestige," says Hill of his decision to stay in Salt Lake City. "All of us who have worked in Utah athletics knew this place was a sleeping giant and we never gave up hope that we could get it done here. My wife Kathy and I love living in Salt Lake City and raising our family here. The University of Utah fit the academic profile of the (former) Pac-10 Conference, so we in athletics did everything we could to position ourselves similarly from an athletic standpoint."

A New Jersey native and Rutgers' basketball player, Hill came to Salt Lake City in 1973 as a graduate assistant basketball coach on Bill Foster's staff. He would then coach high school basketball for four years at Salt Lake's Granger High School before returning to the U. as an assistant coach under Jerry Pimm for two seasons (1979–81). While coaching, he earned a master's in education (1974) and a Ph.D. in educational administration (1982) from Utah. His bachelor's degree from Rutgers was in math education.

After leaving coaching for a position as the executive director of United Cerebral Palsy of Utah, Hill remained connected with the University by teaching in the U.'s special education department. He returned to athletics as the Crimson Club director in 1985 — spending two years in the position before his promotion to director of athletics in October of 1987.

"My children grew up on University of Utah sports," said Hill. "How lucky am I that my family could be with me enjoying the games and excitement surrounding college athletics all these years? I am so grateful to our terrific staff and coaches whose energy and passion for Utah athletics make coming to work something to look forward to every day. The icing on the cake is being around these phenomenal student-athletes year in and year out. They are at the very top of the list for why this is such a great job."

A lifelong advocate for improving the experience of the student-athlete, Hill also prioritized hiring and retaining top coaches and upgrading facilities in his efforts to make Utah a viable power five option. His success in those areas helped Utah athletics reach unprecedented heights along the way.

While dedicated to maintaining the school's established reputation in basketball, gymnastics and skiing, Hill immediately set about redefining Utah football, which had an unremarkable history and just two bowl appearances (the last in 1964) prior to his ascension to director of athletics. Under coaches hired by Hill, the Utes have played in 19 bowl games with a 15-4 record.

In 2004, Utah football was the original "BCS Buster" when it went 12–0 under coach Urban Meyer and became the first school from a non-power five conference to play in the Bowl Championship Series (now the College Football Playoff). In 2008, the Kyle Whittingham-coached Utes finished with a No. 2 national ranking in a 13–0 season that culminated with a win over Alabama in the Sugar Bowl.

Meyer (2004) and Whittingham (2008) both earned National Coach of the Year honors as did another Hill hire—men's basketball coach Rick Majerus in 1998.

Utah's other sports have also attained conference and national prominence during Hill's term. Now in their seventh season of Pac-12 membership, the Utes own four Pac-12 championships—three by gymnastics and one by baseball—and shared the South Division championship in football in 2015.

The gymnastics and ski teams have combined for 10 national championships and 14 NCAA runner-up finishes while qualifying into the NCAA Championships every year. The gymnastics team has advanced to the Super Six 20 times.

Women's soccer, which has played in the NCAA Tournament seven times, is one of two varsity sports added by Hill. The other is men's lacrosse, which will start in 2018–19.

On an administrative front, Hill has achieved national prominence and served on several boards, including the NCAA Division I Men's Basketball Committee (2004–09), chair of the NCAA Championships/Competition Cabinet (1997–98) and the NCAA Management Council Administrative Committee. He was on NACDA's executive committee from 2002–06.

Hill was inducted into the Jersey Shore Hall of Fame in 1998. In 2001, the National Consortium for Academics and Sports awarded him its Degree Completion and Outreach and Community Service Honor Award.