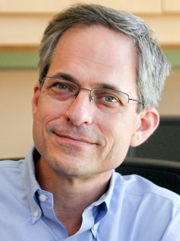 Douglas Goldsmith is the Executive Director of The Children’s Center, a private not for profit agency serving the mental health needs of families with children under the age of 8 years. His tenure with The Center began in 1979 as a volunteer during his college years. After obtaining his doctorate in 1988, he returned to The Center as a staff psychologist, and became the Executive Director in 1995. Fourteen years ago he initiated an annual conference on attachment that continues to educate clinicians across the state of Utah about the importance of applying attachment research to clinical practice. He has co-edited a best selling text on attachment titled; Attachment Theory in Clinical Work with Children. In 2009 he led the expansion of The Children’s Center by raising over $13 million to renovate the historic Oquirrh school in downtown Salt Lake City.

His expertise with young children is recognized by the local press who routinely interview him for his views on a myriad of issues pertaining to young children. In 2009 The Children’s Center received a $1.2 million federal grant making The Center a partner of the National Child Traumatic Stress Network. The Center was one of 25 across the nation to have their grant renewed this year as they received a second $1.6 million dollar grant to continue their work adapting evidence based trauma treatments to very young children. His passion for early intervention has helped to improve the lives of young children across the state of Utah.