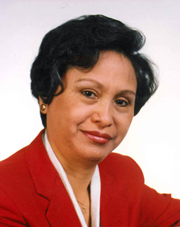 As an Agency for International Development (AID) Fellow, Martha received a Bachelor's of Bilingual Elementary Education (1975) and a Master's of Educational Administration (1976) from the New Mexico Highlands University. After working for the Ministry of Education in Bolivia, in association with the Agency for Educational Development (AED), she received a Ph.D. in Educational Administration (1981) from the University of Utah, under the tutelage of Dr. Lloyd E. McCleary.

Upon graduation, she was recruited to serve as the Director of Faculty Development for the Universidad Autónoma del Norteste, Saltillo, Coahuila. From 1981 to 1988, she also served as Academic Director and is currently an invited professor and program advisor for the Doctoral Program in Educational Leadership and Planning.

For the last 23 years, she has been associated with the University of Texas at Austin. She has served in various capacities, including Assistant Professor, Associate Professor, Institutional Review Board Faculty, Minority Liaison, Certification Officer, President of the Hispanic Faculty and Staff Association, and Member of the Graduate Assembly. Currently, she is Professor and Graduate Advisor for the Department of Educational Administration, College of Education.

She has also served as Board member for the private St. Gabriel Catholic School in Austin, Texas. At the present time, she is board member and Curriculum Committee Chair for Side by Side Kids, a non profit organization that provides after school programs, tutoring and mentoring to elementary school and middle school students in underserved communities. Additionally, she has provided professional consultant services to various universities in Latin America, including Argentina, Bolivia, and México.

During her professional career, she has been the recipient of the following recognitions:

She is the proud mother of Mayté Antelo-Ovando, who was born in Salt Lake City, Utah. Mayté has served the San Diego Unified School District in California as a licensed School Psychologist for six years, and is currently pursuing a Master's of Educational Policy Management at the Harvard Graduate School of Education.