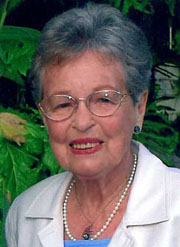 The basis for my love of teaching young people and the accomplishments I have been able to achieve in my 92 years of life are directly related to the guidance and learning provided to me during my college years at the University of Utah. My memories are as vivid as if they happened yesterday!

The University in 1934 was not like the University of today. We had about 4,000 students, while today I understand that there are more than 31,000. Our campus was small with buildings set in a semi circle. The Park Building was at the center, Kingsbury Hall at the north end of the semi-circle and the Library at the south end. A lovely grass area was in the center with the rock (called the Rostrum) in the center with its large U marking. The United States Army Fort Douglas area was above and on the right side of the Park Building. The University was able to expand when Fort Douglas gave its land to the University. The Sergeant in charge of the fort's rifle range was happy to give instructions to the University Women's Pistol Team and to supervise our practice at the shooting range. I can still surprise my grandchildren and great grandchildren when we visit a shooting range. The Sergeant would be proud!

I enrolled at the University as a sixteen-year-old after graduating from West High School in 1934. I graduated from the University with High Honors in 1938 with a Bachelor of Science Degree in Education and a Minor in Spanish. I have always considered the Lower Division Classes we took at that time in our Freshman and Sophomore years important for a well-rounded education. I remember when the women who had helped their mothers can fruit had to convince the physics teacher that putting a spoon in a glass jar prevented it from breaking when hot liquid was poured in.

At West High I was the first female editor of the Panther yearbook which was printed by the school's printing department. That experience enabled me to work on the Utonian, the University's yearbook, as Freshman Editor. I was a member of Alpha Lambda Delta, the freshman scholastic society, and was later initiated into the Kappa Kappa Gamma Sorority. Other happenings during the four years included Jr. Class Secretary, 1937 Homecoming Queen (called that year "Miss University of Utah). Even today when I fly to Salt Lake City I always look out the window for the white-washed U on the hill and remember the excitement of presiding at that song festival. Other honors were Phi Kappa Phi, Honorary Scholastic Society, Beehive Honor Society, Mortar Board Honorary Society for Women and Secretary of the Student Body in 1938.

I remember cheering wildly when Utah played BYU and Boulder in football and basketball. One of Boulder's star players in football and basketball at that time was "Whizzer White" who later became very well known throughout our country as Byron White, Chief Justice of the Supreme Court. As Student Body Officers, we visited several campuses with the University's basketball team and "Whizzer White" was also the welcoming President of the Student Body at Boulder College in Colorado. I have always felt privileged to have had the famous author, Wallace Stegner, as my English Literature professor. He was teaching at the U at the time he was writing his first novel. He made the class interesting, especially to the boys, providing "titillating tidbits" about some of the old masters.

After graduation I moved to Los Angeles, Calif. where I applied for a teaching position in the Los Angeles Unified School District. At that time, one had to first become a substitute teacher. I submitted my transcript of classes from the U, took a written test, had an oral interview and out of 523 applicants I was one of the 25 hired by LAUSD. I was proud of my 'UTE" education!